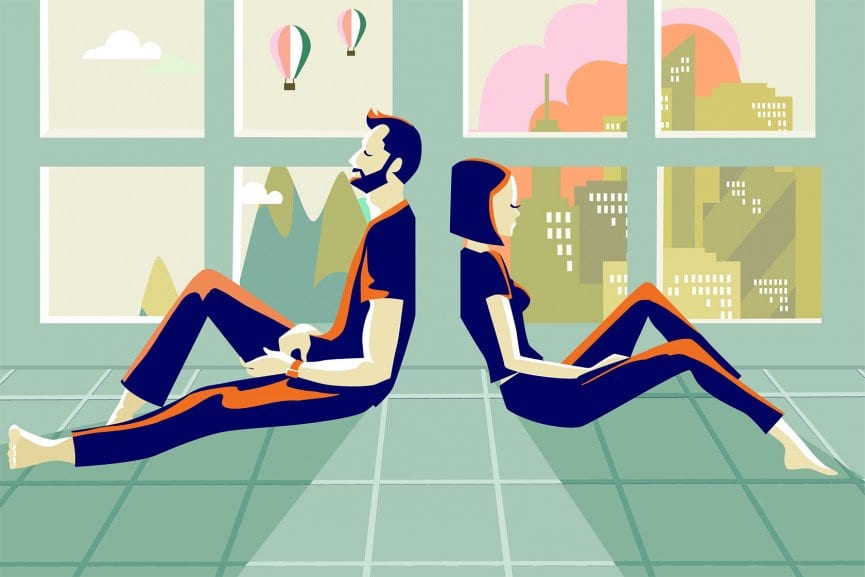 In this article, we’re going to talk about all the ways that mental illness can happen in romantic relationships.

Today, more and more adolescents are going out on dates. They are taking charge of their love life. The question is: are they taking charge in a healthy way?

Sexual urges are normal. There’s nothing wrong with them at all. But the thing is: when adolescents just start dating, they only value sex appeal; and if anyone tries to suggest that there are other things to value, then that person will likely be labeled as boring, old-fashioned or a loser who can’t get any action.

So what happens during this period of heightened focus on sexual pleasure? Does it pass as adolescents mature? Well that depends:

If somewhere down the road, the adolescent also learns to value things like affection, care, intellectual engagement, and laughter, then sex just becomes a normal and healthy part of being in a romantic relationship — a basic and somewhat important need that happens to feel great. Its value is diminished from being the only thing that matters to being one of the things that matter.

On the other hand, if the adolescent does not learn to value much of anything apart from sex, then it sets up a dangerous expectation in their head — the expectation of first having to feel good before they can think about caring.

You can imagine where that kind of expectation might lead…

The expectation to feel good before caring starts a process known as infatuation.

Basically, infatuation is a bond that is held together by “feel good” moments. It can be compared to a person’s “bond” with their favorite speed bike or their favorite dessert. That bond is not love because there would be no attempt to maintain the bond if it stopped feeling good.

Infatuation is so tempting because we live in a very stressful world, and, honestly, it’s not unreasonable to want to feel good at least on a semi-regular basis. But, at the same time, it doesn’t help to wish away the challenges. The minute one starts to believe that infatuation is enough in love, they open the doors to mental illness.

As adolescents move closer to adulthood, they learn the meaning of responsibility. They begin to understand that a good part of being responsible is being devoted to your partner i.e doing things that may not feel good, for the sake of your partner. If couples that have been thriving on infatuation thus far are able to adapt to this new understanding, then they graduate into love. They learn that, in love, it is a must to bear the responsibility of devotion.

But then there’s the other camp. The “it’s not fun anymore” camp. For them, their own responsibilities are often too hard. So doing it for someone else understandably feels like too much. So, they break up. During this break-up, there are memories of the “fun” times, back when responsibilities weren’t around to “complicate” things.

“Dude/Girl, I’m telling you. Love is some complicated shit.” Well, the harsh truth is: if feeling good is your bar for “simple,” then a lot of things in this world are going to be “complicated” for you.

At this point, the expectation isn’t just to feel good before caring, but also to have the right to call it quits if it stops being “fun.” Those who have to beg for the responsibility of devotion are labeled “drama queens.”

In the end, for those who never graduate from infatuation to love, the early foundations of mental illness slowly mature into a self-defeating philosophy: “If I don’t get what I expect, then it can all go to hell.”

After their first breakups, both men and women from the infatuation camp search for a new partner. Both look for “the perfect man” or “the perfect woman.” They want all the rights to a perfect relationship but want none of the responsibility: again, mostly because their life is already too hard. In the end, these people are still looking for infatuation. Only this time, they want to be more firm while asserting their “rights.” Meanwhile, love — an effort to care even when it doesn’t feel good — is still nowhere to be found.

LONG-TERM COMMITMENT AND THE CEMENTING OF PSYCHOSOCIAL MENTAL ILLNESS

Those couples that do go from infatuation to love proceed to solidify their commitment over a longer-term, usually, in the form of marriage, and if that means putting up with discomfort here and there, then so be it. Love makes all the trouble worth it. But those who don’t graduate into love and, instead, remain in infatuation have a very different experience. Let’s break that experience down into 3 broad categories:

Now, we come to psychosocial mental illness, which is any psychological illness that is caused by one’s social perception (hence the use of psycho and social). This would be the case with those couples that continue to expect self-righteous infatuation.

Now, we’ve traced psychosocial mental illness in romantic relationships back to its foundations in this article, which is back when an adolescent fails to graduate from infatuation into love.

If that remains the case until adulthood, then that budding psychosocial mental illness matures to the point of breaking the chemical balance inside one’s head: to make a long story short, the chemicals that are supposed to cause satisfaction in a person stop being produced due to that person’s long-term dissatisfaction with their love life. But that is only the root of the problem. The eventual outcomes of that root could be anything, ranging from severe depression to rape to addiction to abuse to suicide… you name it.

Sometimes, people can do everything right socially and still suffer from psychological/mental illness. This kind of mental illness would not be psychosocial as it would not be the result of social perception. For example, schizophrenia is a mental illness where a person begins to hear voices inside their head, see things that others don’t and have delusions. This could happen to anybody.

Of course, Schizophrenia isn’t the only mental illness that can occur without psychosocial beginnings. Clinical depression, for instance, can too. There are a lot of others that can; and while we’re on the subject of non-psychosocial mental illness, there are physical health conditions that can affect one’s mental health as well, like up-and-down hormone levels or high blood pressure.

So far we have seen that in romantic relationships, psychosocial mental illness builds up for a very long time – in many cases, since early adolescence. Sometimes, it can even begin during late childhood. Thanks to this long build-up, psychosocial mental illness becomes deeply ingrained in the head. The resulting mentality might cause hurt in a million different ways, and yet, remain stubborn, which ends up making the hurt even worse.

But even non-psychosocial mental illness, despite its much shorter build-up period, can be just as stubborn in causing damage to relationships, especially since the behavior involved can seem very inconsiderate to those who don’t know about the illness. In clinical depression, for instance, the victim will show the same utter indifference to loved ones as they will to strangers. Similarly, with paranoid schizophrenia, the victim will show the same extreme and unreasonable suspicion towards loved ones as they will to strangers. So, even though non-psychosocial mental illness doesn’t involve a stubbornly offensive social mentality, it can still cause plenty of hurt in a relationship.

HOW PROFESSIONAL SUPPORT AND THERAPY CAN HELP

As for getting support from a mental health professional — well, before you do that, there are some things you need to clear up.

In short, the whole idea behind professional support and therapy is to deal with any damage that is already done, and also to build hope and happiness for the future.

Simply put, if your romantic relationship is not doing well right now, due to psychosocial or non-psychosocial mental health reasons, then professional support and therapy can help get the relationship back on track

If you or anyone you know needs help for relationship troubles, feel free to reach at bythepeepaltree@gmail.com or 8123238452.

For Sexual and Reproductive health queries WhatsApp us.

Samarth Shetty has an MA in psychology from IGNOU and has 10-12 years of experience in several specialized mental health fields such as schizophrenia rehabilitation and LGBT counseling. Currently, he practices mainly as a life coach, but occasionally ventures into other modes of service such as seminars, workshops, and internships. He also participates in outreach programs for general sexual awareness, gender equality, LGBT rights, and awareness as well as stigma removal.

Kunal is a writer and a thinker. He has authored “4 weeks – the beginning”, (which is available on Amazon) as well as co-authored two IEEE research papers. He has also given a TEDx talk titled “childish fantasies”. Kunal secured a degree in computer science and an internship from Silverline Counselling and Learning Center. Psychology as a subject has always been close to Kunal’s heart. To that end, he has switched career paths and is currently a master’s student in psychology at IGNOU and an editor/coauthor at bythepeepaltree.wordpress.com.